Dalia Nosratabadi, an Iranian photographer, gained her first international recognition when she unveiled her photographic series Upside Down, landscape reflection in puddles. Since then, her qualities and talent as an aesthetic photographer continue to take us through every photo, on a wondrous journey into the world of water.
By: Gilad Segev, Partnerships Mentor for small businesses. // 23 February, 2021

It is hard not to stop next to the works of Dalia Nosratabadi when passing through the exhibition, whether virtual or real.

One of the art critics described the water images she creates as “an element that puts viewers in a state of weightless levitation. It has the unique ability to cause us to enter an eternal universe. It takes us into a strange and exciting world, as if we are floating in space.”

Indeed, the lack of "up" and "down" directions acts for the viewers as a deliberate negation or deliberate provocation of Newton's law, and it reveals sensual bodies abandoned in space, evolving in unreasonable positions. In her recent work with models, she continues to move between portrait photography and the abstract, focusing on the movement of water and the accumulation of air bubbles on clothing and on the skin. Nosratabadi, aware of the effect that arises in viewers, even gave one of the latest series of her work the name - "Gravity". 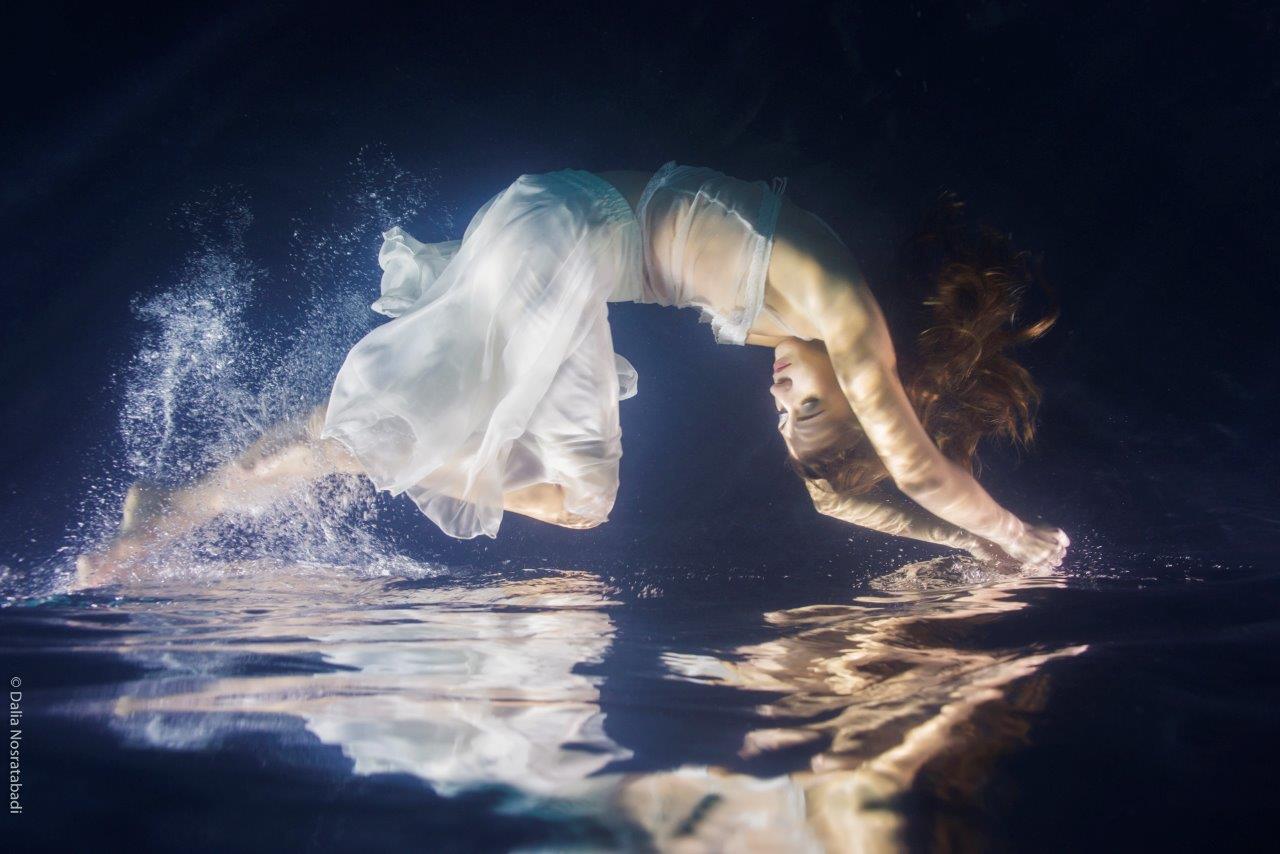 The contemporary photographs of Nosratabadi, a native of Iran and currently a resident of Brussels, can be found in galleries in New York, San Francisco, Bangkok, Paris and many other galleries around the world.

She started painting at a very young age. Than following the ayatollahs' revolution, the family fled to Belgium, when Nosratabadi was only 9. The successful sales of her paintings started when she was 10, and at the age of 14 she moved to the School of the Arts in Brussels, where she specialized in painting. Later she shifted to murals, and about 15 years ago she made the switch to photography, and then came the discovery. A very talented lady in the new field. An interesting biographical item: At the beginning of her career, in parallel with her rain art of photography, which takes place only in winter, during rest of the year Nosratabadi made a living from body painting at festivals.

On one occasion, while hiking in New York, where she had arrived in her wanderings, she noticed reflections in puddles, and from there the road to the art summit was short. The first show in New York was already a dizzying success. From there she continued to walk with a backpack while following the rain. These trips have led to photo series from Hong Kong, Paris, Tokyo, Dubai, Japan, Mexico, Thailand, New York, London, Israel and more and more. 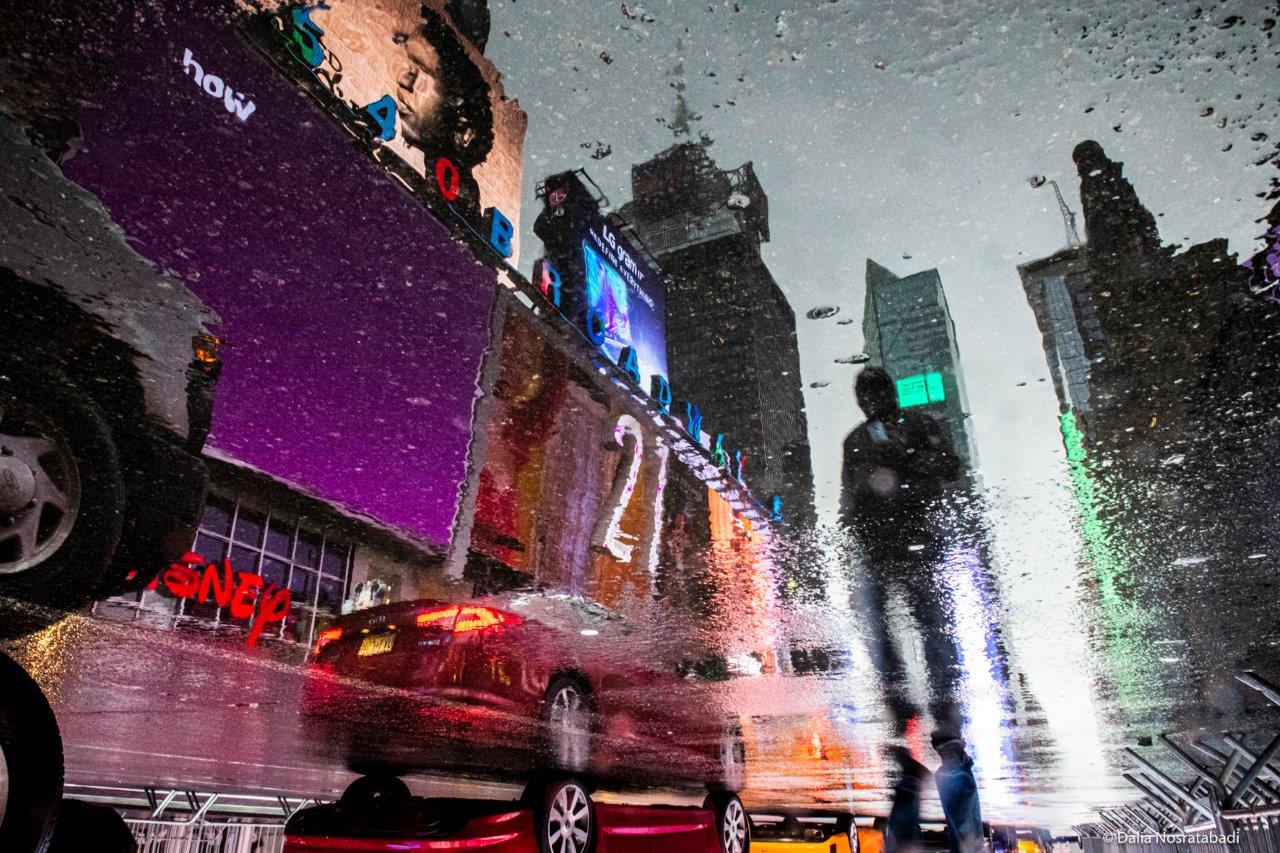 In a series of "inverted" photographs - a reflection of landscapes in puddles, she confirmed her qualities and talents as a photographer of aesthetic images, while taking viewers on an experiential journey. "What can be normal in a sunset photography and how can the most photographed metropolis in the world, New York, be shown in a new light?" She wonders, in the same breath, pointing to her works. “That's the answer. I'm always looking for those special, lucky moments that join me in the filmed dance", she says.

Indeed, the constant search for these moments of chance, have become a search that leads this all-too-talented photographer all over the world. "Raising luck for art means that technology and photo editing software are not required to create the dreams," she says. "If the most ordinary sunset is reinvented, it will, of course, cause feelings of mystery and emotion."

In her photographs, the city, for its variety of symbols, as well as its rugged patches and its mixed diversity - the many advertising signs, flickering neon advertisements, car traffic and pedestrians - all appear in full force. These are highlighted by the contrast of color mass and texture, where the smallest item plays a part in the overall balance. 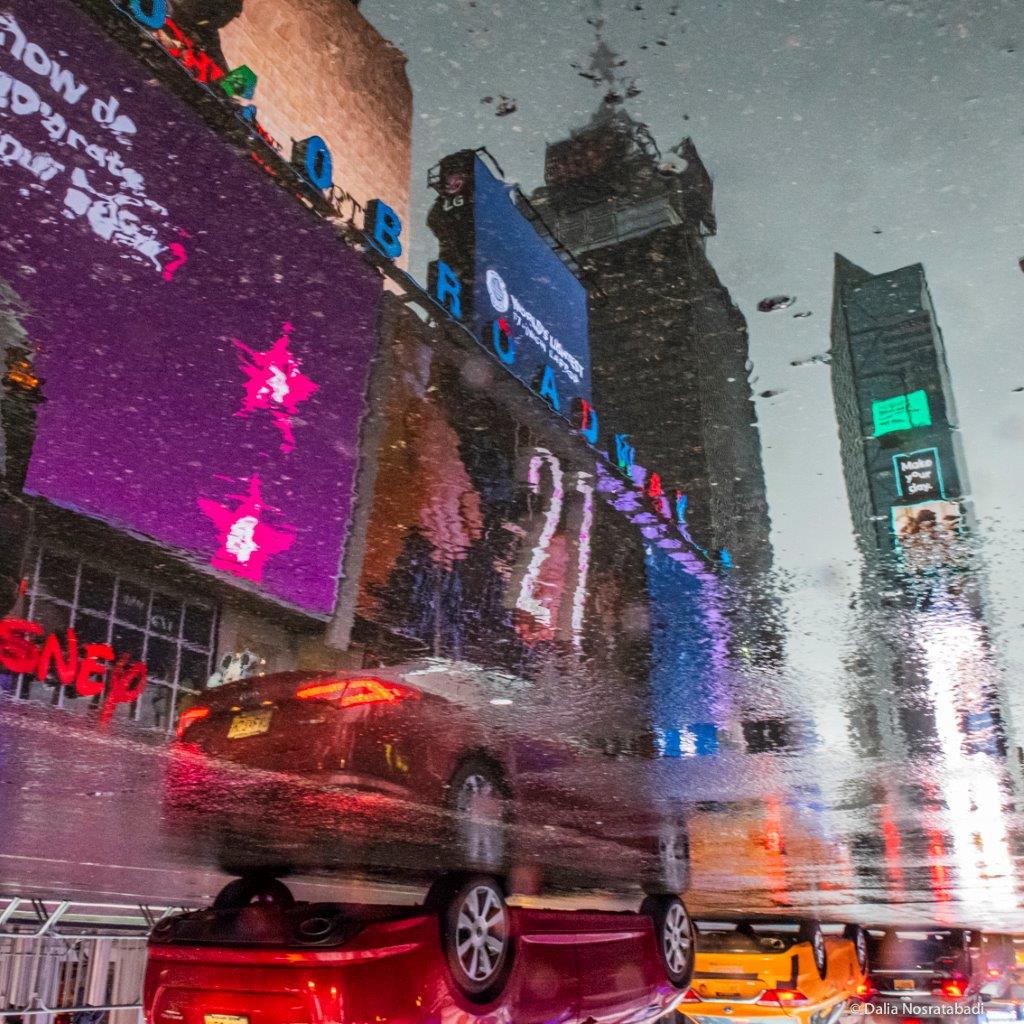 But where is the human element in all this? “I make pretty intense use of faces and bodies, which are like passing shadows that are captured willingly and even in anticipation, and breathe life into the image. The human figures add power to the image and provide allusions and quirks. Their presence informs us that we have sunk for a moment in an American, Japanese, or perhaps an Israeli city. Sometimes viewers discover a moving group of pedestrians, a standing figure or a cyclist who suddenly appears, but nothing is different enough to form a personal image and the feeling continues to flow. I appreciate that in my photography I open a door to a vague universe that can be entered, in which the viewer is allowed to invent his own story according to his perception, or according to the appearance of his surface and his appreciation of the shades of color.” 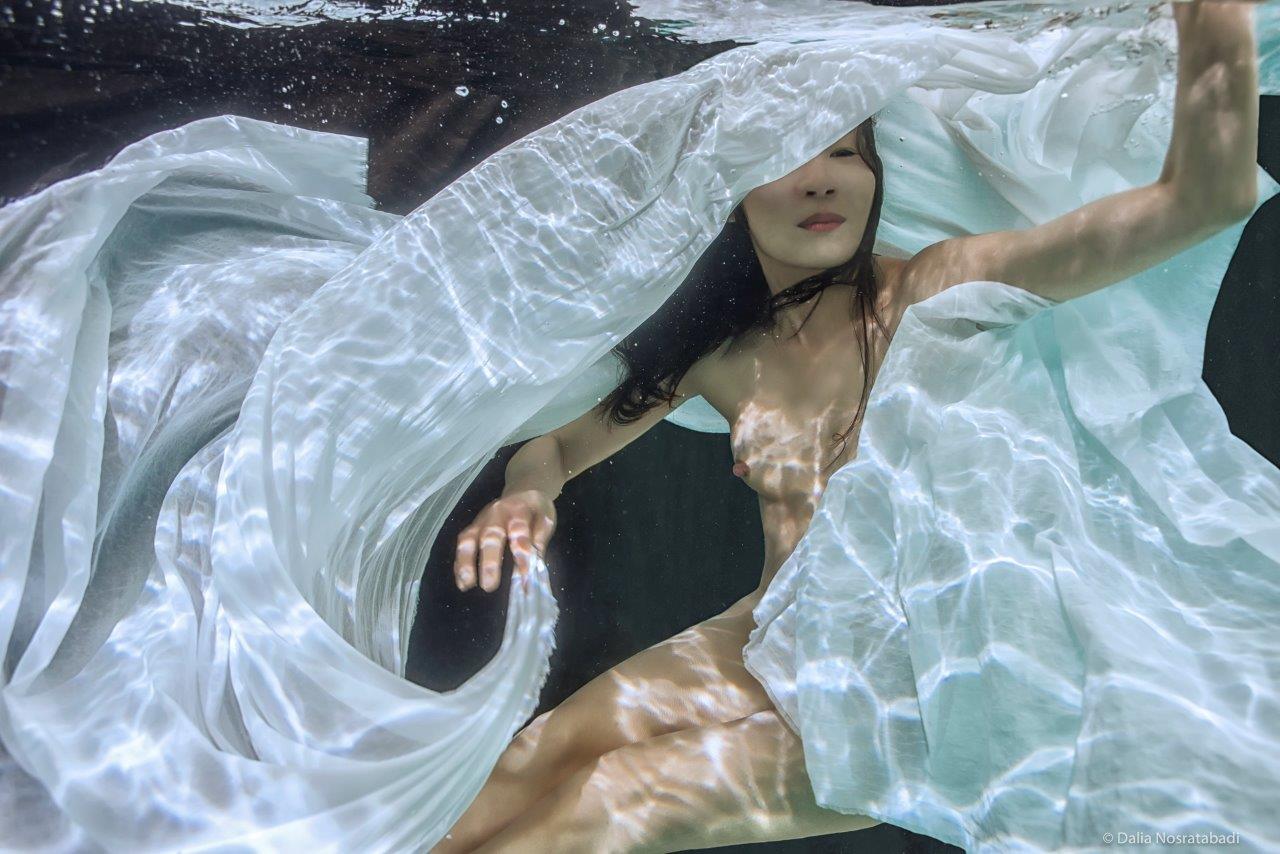 Her passion for working on portraits, and of course combining water, led her in 2015 to work in a pool. “Working in a pool requires complicated logistics that usually involve a team of four to five workers. The challenges in pool photography include selecting suitable models. The physical effort required of the model limits the duration of her participation in a session, and so, for each photography day a number of models are selected who alternate throughout the day. In between, for each number of photos, a makeup refresher is required and of course complicated preparations of blackening the pool and adjusting lighting. All that while strictly maintaining the designer dresses on loan for the benefit of the project." The results? As expected - spectacular. 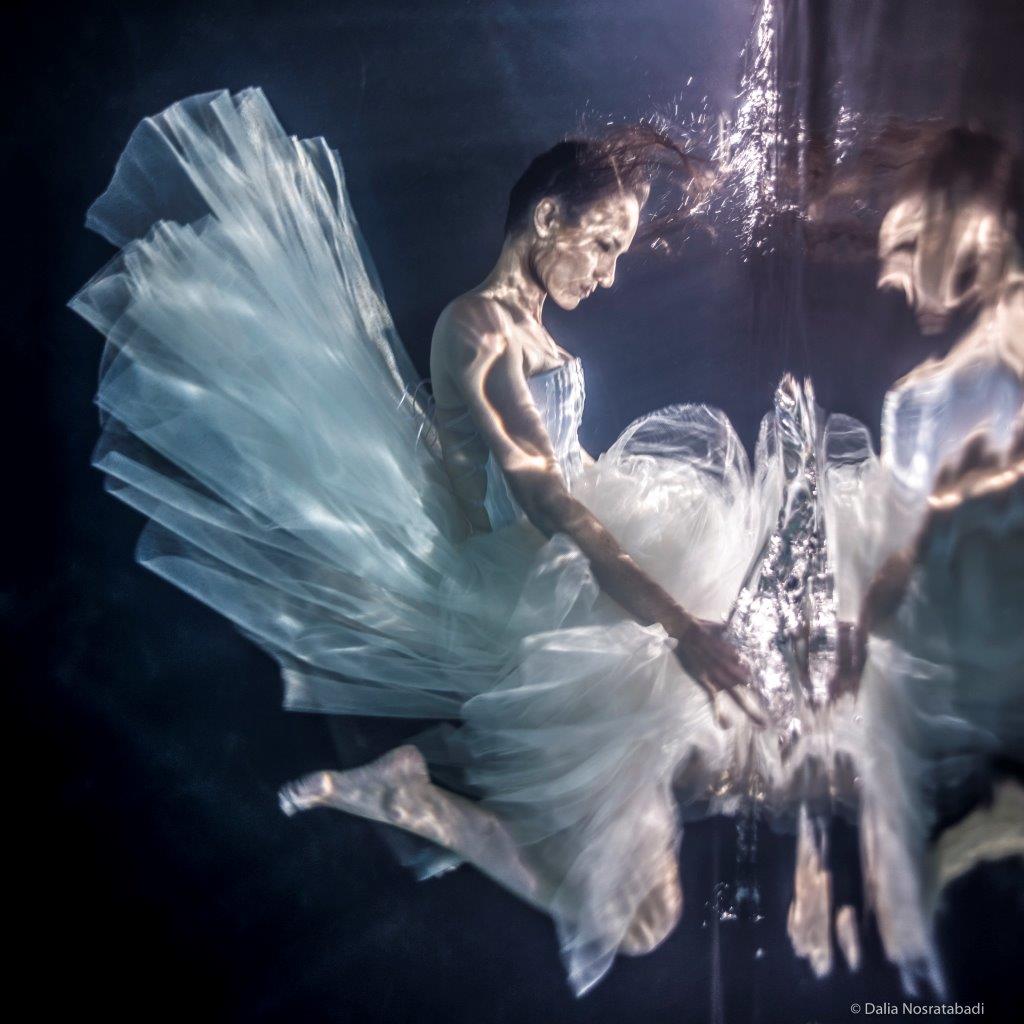 At the end of the interview, two new facts about the talented creator are revealed: one, although it can be thought that her passion should have led her to scuba dive, Nosratabadi, who experienced two drowning incidents as a child, one in the pool and one at sea, prefers to free dive. Then she admits that she was inspired by the painter Saul Leiter, whom she admires, whose paintings highlight urban banality in surprising shades, as well as the pictorial gestures of Gerhard Richter, who in his family portraits is able to turn a 'normal picture’ to an art creation…